Why Truffle needs to be Halal certified? and the difference with Chocolate Truffle

TruffleFood
A truffle is the fruiting body of a subterranean Ascomycete fungus, predominantly one of the many species of the genus Tuber. Some of the truffle species are highly prized as a food. Wikipedia
Truffles are a fungus that grow in the earth in forested areas; Usually in the shade near trees. They can be found most dominantly in Europe and the Middle East. They are especially infamous in France and Italy. The French black truffle and the Italian white truffle are like diamonds in the culinary world. They are rare and have to be excavated deep within the dirt like a potato. They are also extremely expensive (the photo shows around a thousand dollars worth of truffles).
The reason why they are usually referred to as a mushroom is because they are a fungus much like a mushroom and are found in the woods; However mushrooms are a type of fungus that grow above ground and truffles are subterranean which is they are not technically “mushrooms”.
Black truffles also lend an amazing, earthy flavor to dishes that you would normally cook mushrooms in. White truffles, on the other hand, are usually served raw and are shaved onto a dish similar to how you would shave cheese.*
To cultivate truffles, inoculated truffle trees are planted in orchards much like those for fruits and nuts, except that the crop appears below ground and is usually harvested with the help of trained dogs or pigs that can smell the truffles through a layer of earth. Truffles begin to appear several years after the inoculated seedlings are planted and production can continue for decades.**

Inoculated Truffle trees
The female pig’s natural truffle-seeking, as well as her usual intent to eat the truffle, is due to a compound within the truffle similar to androstenol, the sex pheromone of boar saliva, to which the sow is keenly attracted.
White truffles are generally served raw, and shaved over steaming buttered pasta or salads or fried eggs. White or black paper-thin truffle slices may be inserted into meats, under the skins of roasted fowl, in foie gras preparations, in pâtés, or in stuffings. Some speciality cheeses contain truffles, as well. ***
The flavor of black truffles is far less pungent and more refined than that of white truffles. Its strong flavor is often described as syrupy sweet. Black truffles also are used for producing truffle salt and truffle honey.***
While in the past chefs used to peel truffles, in modern times, most restaurants brush the truffle carefully and shave it or dice it with the skin on so as to make the most of this valuable ingredient. A few restaurants, such as Philippe Rochat in Switzerland, still stamp out circular discs of truffle flesh and use the skins for sauces.***
Truffle oil

Truffle oil is used as a lower-cost and convenient substitute for truffles, to provide flavoring, or to enhance the flavor and aroma of truffles in cooking. Most “truffle oil”, however, does not contain any truffles. The vast majority is olive oil which has been artificially flavoured using a synthetic agent such as 2,4-dithiapentane. *** 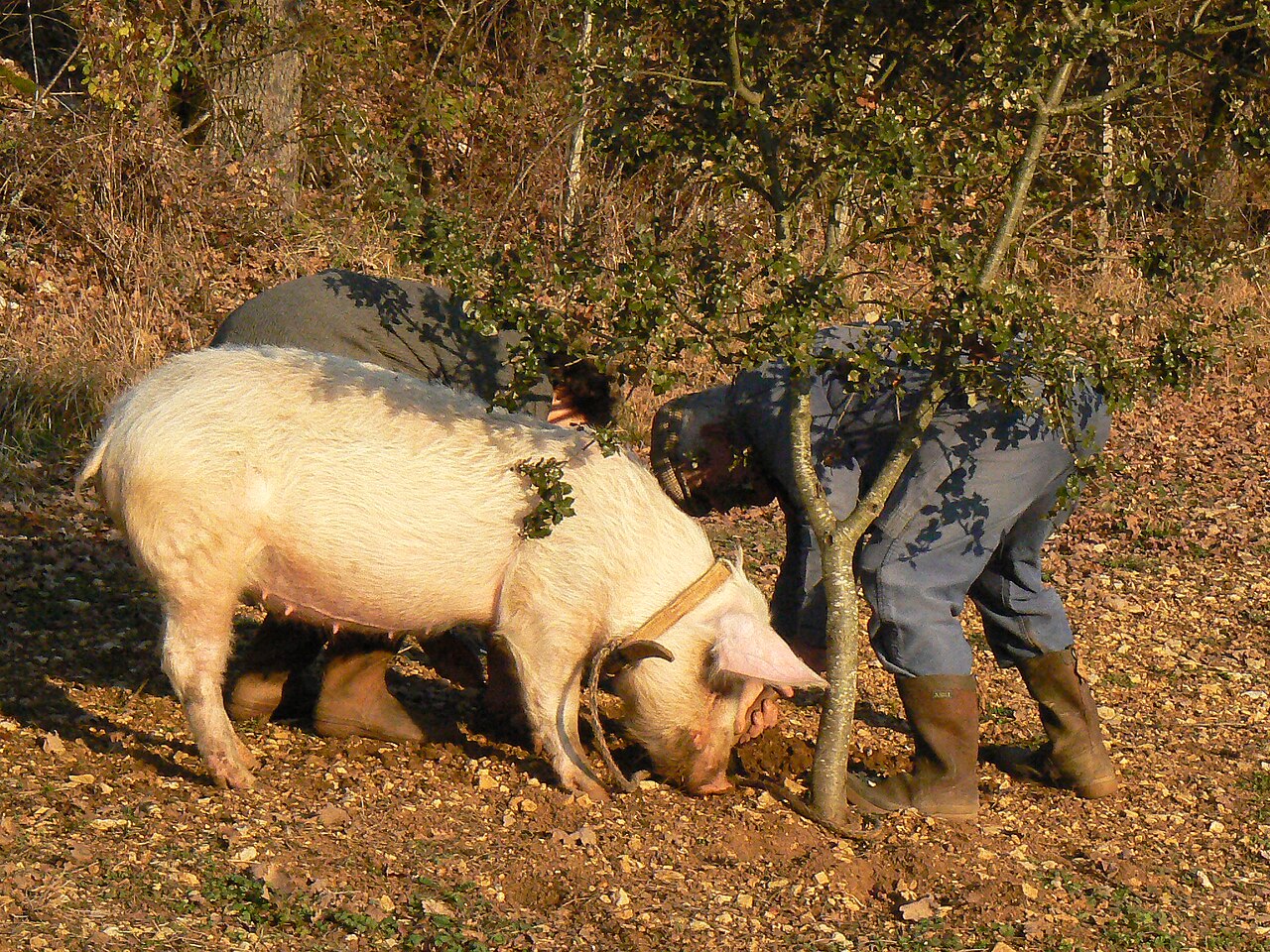 “Cochon truffier” by Vayssie Robert Robert Vayssié – Own workGignac Lot France. Licensed under CC BY-SA 3.0 via Wikimedia Commons
The truffle hog or truffle pig is a domestic pig used for locating and extracting a type of tuber known as truffles from temperate forests in Europe and North America. The pigs have a good sense of smell and are able to identify truffles from as deep as three feet underground. It is thought that the natural sex hormones of the male pig are similar to the smell of the truffles and also pigs have a natural affinity for rooting in the earth for food. They are trained to hunt truffles by walking on a leash through suitable groves with a keeper.****
Truffle hunting with pig

A chocolate truffle is a type of chocolate confectionery, traditionally made with a chocolate ganache centre coated in chocolate, icing sugar, cocoa powder or chopped toasted nuts, usually in a spherical, conical, or curved shape. Wikipedia

What most people don’t know is that chocolate truffles are aptly named “truffles” because of their resemblance to a real truffle. These delicious chunks of chocolate mimic the shape and size of a truffle in addition to having dusted coco powder on them to symbolizes the dirt. That’s about the extent of the similarity!*

The doubtful part is the contamination level during the harvesting stage (najs); and storage of the Truffle (thoyibban) especially when you have an animal within the premise. Only Halal certifiers would be able to guarantee the Halalness. Farmed Truffles uses modern-agri without traces of pigs and dogs as hunting animals would be an answer to produce Halal Truffles.

Keep in mind, truffle-oil would probably Halal friendly since it used olive oil as artificial flavoring. However, my technical community has commented that some truffle oil is infused with real truffles. So, please check!

For Chocolate Truffle, beware the use of rum or other alcohol for coating the candy etc.

This site uses Akismet to reduce spam. Learn how your comment data is processed.