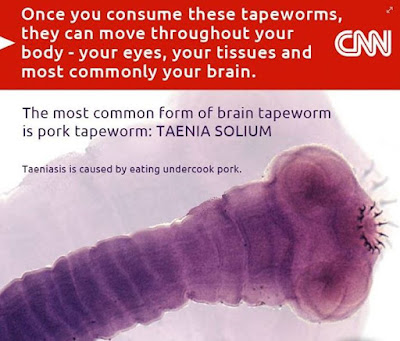 There are many forms of tapeworm, three of which can readily infect the brain. From a public health perspective, there is one, in particular, to watch out for. “It is mainly the pork tapeworm that’s the main brain one,” says Helena Helmby from the London School of Hygiene and Tropical Medicine. The pork species, known as Taenia Solium, can infect humans in two forms. The first is by eating undercooked pork from infected pigs, resulting in taeniasis — an adult worm residing in the intestine. In the larval form, the second is through contact with the faeces of an infected pig or human, which can infect many tissues. If the larval worm enters the nervous system, including the brain, it can result in a condition known as neurocysticercosis. Source : CNN

Articles are taken from Adilah Hamid:

(By following the Tanakh)

“And the pig, because it has a cloven hoof that is completely split, but will not regurgitate its cud; it is unclean for you. You shall not eat of their flesh, and you shall not touch their carcasses; they are unclean for you.” (Tanakh, Leviticus 11:7-8)

“And the pig, because it has a split hoof, but does not chew the cud; it is unclean for you. You shall neither eat of their flesh nor touch their carcass.“ (Tanakh, Deuteronomy 14:8)

(By following the Old Testament)

If they follow the Old Testament (also known as Torah, Hebrew Bible or Jewish Bible) they have to follow the dietary laws as well.

According to the New Testament Matthew 5:17, Christians cannot abandon Old Testament and need to follow laws of Moses. As Jesus said there, ” Don’t misunderstand why I have come. I did not come to abolish the law of Moses or the writings of the prophets. No, I came to accomplish their purpose”.

(By following the New Testament)

“Eat anything that is sold in the meat market without raising any question about it on the grounds of conscience” (Bible, Corinthians 10:25) *Please read Corinthians 10:25 to 10:29 for better understanding of the verse

(By following the Quran)

“He has made unlawful for you that which dies of itself and blood and the flesh of swine and that on which the name of any other than Allah has been invoked. But he who is driven by necessity, being neither disobedient nor exceeding the limit, then surely, Allah is Most Forgiving, Merciful.” (Quran, Al-Baqara 2:173)

“Prohibited to you are dead animals, blood, the flesh of swine, and that which has been dedicated to other than Allah , and [those animals] killed by strangling or by a violent blow or by a head-long fall or by the goring of horns, and those from which a wild animal has eaten, except what you [are able to] slaughter [before its death], and those which are sacrificed on stone altars, and [prohibited is] that you seek decision through divining arrows. That is grave disobedience. This day those who disbelieve have despaired of [defeating] your religion; so fear them not, but fear Me. This day I have perfected for you your religion and completed My favour upon you and have approved for you Islam as religion. But whoever is forced by severe hunger with no inclination to sin – then indeed, Allah is Forgiving and Merciful.” (Quran, Al-Maidah 5:3)

“Say, “I do not find within that which was revealed to me [anything] forbidden to one who would eat it unless it be a dead animal or blood spilled out or the flesh of swine – for indeed, it is impure – or it be [that slaughtered in] disobedience, dedicated to other than Allah . But whoever is forced [by necessity], neither desiring [it] nor transgressing [its limit], then indeed, your Lord is Forgiving and Merciful.” (Quran, Al-Anam 6:145)

“He has only forbidden to you dead animals, blood, the flesh of swine, and that which has been dedicated to other than Allah. But whoever is forced [by necessity], neither desiring [it] nor transgressing [its limit] – then indeed, Allah is Forgiving and Merciful.” (Quran, An-Nahl 16:115)

Another dangerous helminth is Trichura Tichurasis. A common misconception about pork is that if it is cooked well, these ova die. In a research project undertaken in America, it was found that out of twenty-four people suffering from Trichura Tichurasis, twenty-two had cooked the pork very well. This indicates that the ova present in the pork do not die under average cooking temperature.

Pork has very little muscle building material and contains an excess of fat. This fat gets deposited in the vessels and can cause hypertension and heart attack. It is not surprising that over 50% of Americans suffer from hypertension.

5. Pig is one of the filthiest animals on earth

It lives and thrives on muck, faeces, and dirt. It is the best scavenger that I know that God has produced. In the villages, they do not have modern toilets and the villagers excrete in the open air. Very often, excreta is cleared by pigs.

Some may argue that pigs are bred in very clean and hygienic conditions in advanced countries like Australia. Even in these hygienic conditions, the pigs are kept together in sties. No matter how hard you try to keep them clean they are filthy by nature.

Watch and read more on this topic at https://thedeenshow.com/why-eating-pork-is-bad-for-humans/